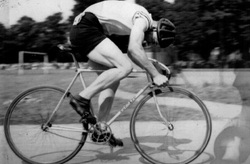 A Brief History of Tommy Godwin, Olympic Medallist
Tommy's first bicycle was a Wrenson's (a grocers) delivery bike and he soon discovered he could ride and deliver eggs and bacon faster than anyone else! His interest in and inspiration for competitive cycling came from watching the 1936 Olympic games. Three years later he began racing and rode the fastest 1000m of the season. Working as an electrician for BSA meant that he was exempt from call up and so could continue racing in the many hard track and grass track events in the Midlands

The end of the war meant more sporting opportunities in Britain. Tommy was training hard during this time, which helped him qualify first for international selection and eventually the 1948 Olympic Games in London. Tommy’s career highlight came at these Games when, at the age of 27, he won two Olympic bronze cycling medals; the Men’s 1,000m time trial and Team Pursuit. He also went on to win a bronze medal at the 1950 British Empire Games held in Auckland, New Zealand (now called the Commonwealth Games).

Following his competitive career Tommy ran his own cycle shop in Kings Heath and started coaching local riders. Eventually this lead to him taking on the role of the first ever paid national coach and the prestigious role of manager of the British Cycle Team at the 1964 Tokyo Games. He later became Chairman of the Racing Committee. Have a look at this short video Tommy Godwin the Man and his Bikes

As Britain's first paid national cycling coach he helped train a new generation of British track riders, many of whom went onto win national and international titles and medals.

In retirement Tommy was as enthusiastic and motivating as ever, relishing every opportunity to inspire others and share his passion for sport. He was very proud of his role as a Loughborough Flames ambassador, motto “Honour the past but look to the future”. This project went on to win the Podium Coubertin Olympic Vision award. He enjoyed speaking to children and young people about his experiences in the build up to London 2012 for which he was an official ambassador.

He was presented with an honorary doctorate in Sports Science from Loughborough University a proud achievement for someone who had little formal education beyond the age of 12.

You can find out more about our Tommy Godwin here and in his autobiography It wasn't that easy (2007). Copies of this are available with all the proceeds going to charity. Please use the contact form if you would like one.

Watch Red Kite Cycles' latest short video, made in 2016. Adrian talks to Brian Wevill, a local cyclist who worked for Tommy Godwin in his cycle shop in the early seventies. They talk about his immaculate Godwin race bike, his memories of Tommy and his shop, and his plan to ride the bike in the 2016 Tommy Godwin Challenge Sportive.